The Velveteen: Rehab It. 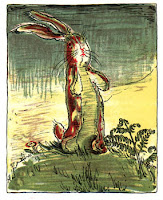 A recent thrift store find was this brown velvet(y) jacket (don't worry, I won't be homing in on the thrift-find territory).  It is a moderate velvet jacket, partially lined, exceedingly soft, but with some very disagreeable buttons depicting a cereal crop of some kind (if anyone wants them, I'll even pay the postage).  Also, the side-vented stern has two rips, and the seam is only the origin of the tears... they go a full inch into open fabric, making any potential repairs tough. At $4 for the whole get-up though, it is worth the try. 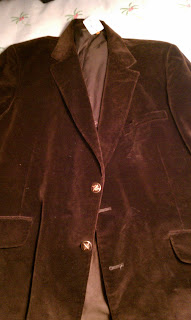 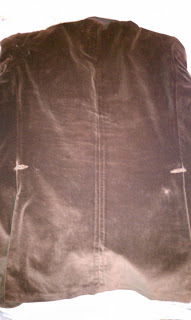 I dug around eBay for a bit, and ordered a dozen very small frog closures from China for $5.  A quick stop by Windsor Button in Boston for two larger frog closures, and then I brought the entire thing to the tailor.

----------
2 Weeks Later......
----------
The rips turned out to be difficult to repair, so two sets of opaque triple Flemish flakes were the only interesting way to cover the seams, and they make surprisingly passable external gussets.  They actually fasten together, but there will obviously be no need to undo them ever. 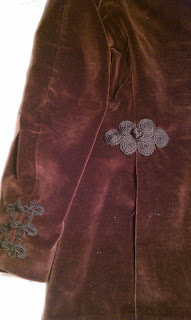 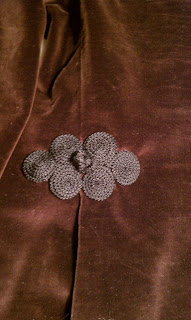 I gave the front of this swarthling two new frogs to replace the buttons, and took further license to administer an equally poetic twist to non-functional flourish by giving each cuff its own plague of frogs... in mini-form and triplicate.

Combined with spotted silk for the neck and brown velvet slippers, I was was ready to do what I do best: Stand overly upright with drink in hand delivering my cocktail laugh to some pained-over anecdote of falsified social heroism before eventually returning same.

When the deck was finally coiled down, this entire senseless exercise in jacketry cost about $55.  So now I have a brown velvet jacket of questionable quality adorned in needlessly-fancied closures which consumed a few hours with hassle and can now be worn only occasionally and specifically, yet will still occupy closet space and annoyingly require regular care.  Perfect!
Posted by Yankee-Whisky-Papa at 8:23 PM