Loons rouse me up before dawn, and I tip-toe down to the water and slip quietly into the canoe to paddle solo across the Lake to where the trout are feeding on an early hatch.  The bugs are jetted upward in a column of 58 degree water from springs deep in the gin-clear lake.  A morning of quiet and solitary fishing and then back to the cottage where I rouse the family with the smell of bacon, eggs, and buttered toast just as the sun comes up.  A lunch hike up the trails, and then the afternoon is spent splitting and stacking a half-cord of white birch.
Other parcels of land are in dispute all around us, as the later generations of other families squabble over the direction and temptation of liquidation that their properties offer, all of which would shiver their ancestors if the iron-gated family plots had ears.  The great-grandchildren of a timber industry and paper family across the water squandered a generous trust with perpetual college-dropping-out in favor of cocaine-fueled ski trips to Vail, Aspen, and France.  Not even the family lawyers could save them, and their land went into default, eventually ending up in a conservancy easement.  To the north, the great-great-grandson of an early mechanized textile production magnate could not bring himself to accomplish anything beyond coasting on the vapors of momentum afforded to him by family reputation, and began to drink himself to death about 10 years ago (think Randy Bragg, but without the redemption).  This spring, he finished his task, and when his estate was examined, it was determined that the massive house itself was beyond repair.  The footprint (stone foundation) is on the market though the timbers haven't even been dismantled yet, and will likely be replaced by something extravagant and distasteful.  The lawyers liquidated the contents to auctioneers, but not before one of the old caretakers who still had paternal memories of the deceased (he had been hired by the deceased's father) crept in to the boat house one night after the valuators left, stepped the mast, set his employer's dilapidated wooden sloop adrift, and burned it like a viking funeral.  Others who saw the distinct lines of the boat consumed in flames at 2am knew immediately it was not vandalism, but the last dignity and honor afforded to a kind but tragic waste.  When the mast and ribs were snuffed out as it finally sank, so was an era.
Blueberries return every year, though some families may not.  Laketrout go deep when it gets hot, but they still run up to the feeder creek in search of crayfish, and I occasionally meet them there.  Expansion permits come mysteriously easy for New Money, and old lastnames no longer impress local town councils: PERMIT REQUEST DENIED.  A trip in the old stationwagon to the neighboring farm where one chooses one's eggs in the barn's pantry, and either leave money in a coffee can, or write the takings into the ledger to be paid later.
Posted by Yankee-Whisky-Papa at 11:15 PM 5 comments: 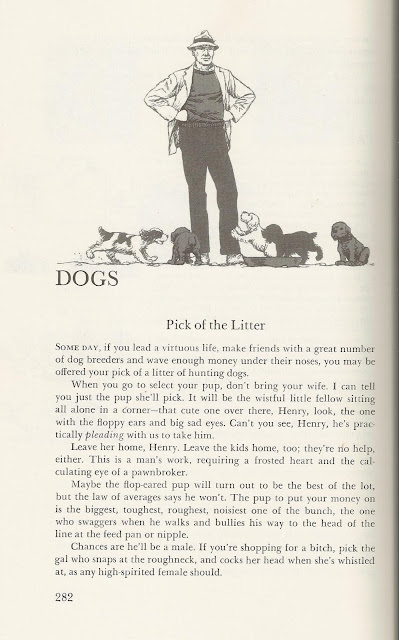 From Tap's Tips - Practical Advice For All Outdoorsmen, by H.G. Tapply, 2004.  If you enjoy fishing, hunting, shooting, and camping, this book is a must.  The last paragraph above is illustrative of the general tone of this great book.
A solemn and silent glass raised to the Main Line Sportsman today.
Posted by Yankee-Whisky-Papa at 10:57 AM 2 comments:

Boston Ivy (parthenocissus tricuspidata) is in bloom... or leaf, I guess.  Below, is the same section of vine.  It will continue to get larger, and deeply green.


In the summer, the ivy keeps the sun from hitting the brick walls, and keeps the house cool(er).  In city, country, or coast, we don't own or use air conditioning, preferring slow movement and cold drink.  Heat is always more tolerable with the right music.  Bossa nova, calypso, samba, and other humidity-based genres make things a bit smoother, and the truly bad heat never lasts more than a week or two.
In winter, the leaves are gone (unlike English ivy) and the sun can warm the bricks a little.  I also like the aesthetic of sharply groomed windows, frames and doorways... a dichotomy of wild growth and human control.  The sparrows and starlings also love the ivy, and we have a city of nests within the leaves, the bustle for which begins at 5am every day.  Boston also has creeping hydrangea, but I am teetering on the verge of boring even myself already.
It was a painfully humid evening, and my sister and I sat down in the horribly hot and dimly-lit dining room at Grandmother's (rest in peace).  There was a very long table, and several candles added to the heat.  As a 7-year old, 8pm was not only my bedtime, but it was a half-hour past my sister's.  I sat upright, with a tie smothering my neck, so hot that my usual antsiness was kept in check for the economy of movement.  For who-knows-what-reason, the windows were closed, and Grandmother preferred the large double doors to the other rooms also closed.  Our parents were likely seated comfortably somewhere in a generously air-conditioned theater enjoying a relaxing performance on the other side of the city.  The dinner arrived, and my lucky sister was able to fall asleep moments before, slouching atop her phonebook-booster seat, with her white headband barely visible above the edge of the table across from me.  Far at the other end of that long stupid table, a plate was placed in front of Grandmother, and another approached me.  When Ms. B put the food in front of me, my heart sank: hot roast beef and steamed vegetables.  The stifling heat was enhanced for a moment with the smell of hot cauliflower and unctuous and savory beef broth, and it was more than I could take.  The blood left my head, and I slid unconsciously down in the uncomfortable wooden chair.
When I came to, Grandmother was kneeling next to me with a cool damp towel from the kitchen, and Ms. B was fanning me.
"Are you feeling better?"
"Yes, Grandmother."
"Good.  Take your seat again while your dinner is still hot."
Posted by Yankee-Whisky-Papa at 2:40 PM 3 comments:

A week of traveling to Virginia and North Carolina has produced some interesting experiences.  To begin with, NCAA Lacrosse has been particularly exciting, and I have been able to watch several of the games... one of which was won with one remaining second on the clock to the tie-breaker (Hartford/Stony Brook).

Between meetings, I was able to sneak off into the splendid Virginia Countryside (northwest of Charlottesville) in Madison County, where pre-dawn brook trout unskeptically took the flies I showed them.  Later in the day, when the shadows were long again, I pulled the waders over my suit trousers and caught a few more. 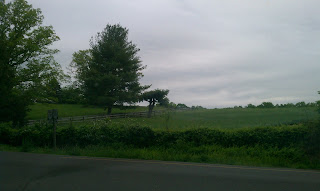 Mrs. has a particularly charming fly-fishing outfit that gets stares from both man and beast.  She is hard to miss when she's in the wilderness in this.

Back home to Boston for a few days where a small nest-fallen bird perched on my finger at Government Center. 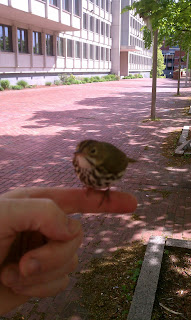 Again south days later, but to Chapel Hill where watching the lacrosse was great, the parties were fantastic, and a college friend got hitched to a beautiful woman during an outdoor ceremony.  I wore this to the rehearsal dinner.

A great shop on Main St. offers the reverse of my Brooks Brothers Shirt, though they were asking $170 for an off-the-shelf shirt (it was charming).  Obviously, this Yankee did not even consider it... bespoke shirts are often less.


In their window was a blue cuff/collared shirt with blue elbow patches... I loved it.  My friends and I stopped when we saw this one. 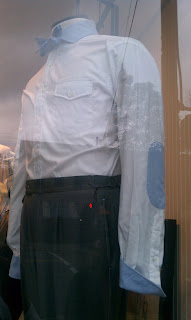 The carpet in the hallways at Aloft Hotel reassured me of my sock choice an evening later. 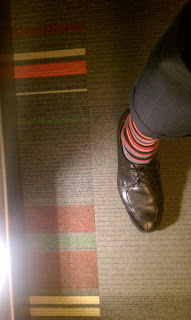 With a full 20 degree average increase in temperature compared to Boston, it was refreshing to stroll around wearing lighter cottons, naked ankles, and smiles.  The Virginia/North Carolina area is perfect right now, and people know how to dress for events... the heat has not set in yet, but the sun is out, and when I return to Boston, spring will still be in her moody phase.  Until then, I raise a glass to the upland south.