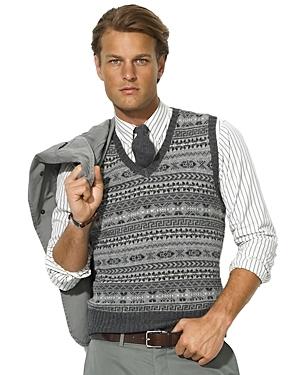 Am I the only one NOT enamored by the Fair Isle sweater?  They're acceptable, but I can't seem to get my heart-rate up about them.  I have one in a trunk somewhere, but I don't have the motivation to dig it out.  Even though they've been around for the better part of a century, I'm lukewarm at best.

L.L. Bean Signature had their own version, and the joke wrote itself:

Don't get in his van... the candy tastes like chloroform.


After a brief stop at a California vineyard, I was amazed by the photos around the place; mostly by how cliched they all were.  Apparently, it is impossible to show grapes of any sort without them having that morning dew look to them (though likely, it would be from the watering systems that vineyards set up).  The wine was fine, but the whole vineyard experience in general is so overly precious that my eyes hurt from quietly rolling.

When I got home to Boston (pre-Thanksgiving), I took my phone camera to the ivy berries growing on the west side of the house.  Boston Ivy grows tiny beautiful-but-toxic berries in the autumn as the leaves begin to fall, and I decided to get VERY pretentious with some home photographin'.

A spritz with the water bottle...

Morning dew magic.  If only I could talk
annoyingly about the sun and the soil.

Cropped.  There we go.  This is the type of trite,
hackneyed crap for which I was hoping.

Men's style and wine very often have many of the same types of players, and the faults are often identical.  Recently, I was able to draw some parallels between behaviors I can't stand for wine or for men's style.

-Being constantly critical of items not within your narrow preference

-Continually redirecting the conversation back towards your analysis and evaluations

-Not realizing that wine/clothing are components of socializing, and that the focus should be on the comfort of your guests or the conversation with companions, etc.

-Not making decisions for yourself: blindly adhering to antiquated or nouveau notions, criteria, or terms and not unapologetically embracing that which you truly enjoy

-Unskeptically accepting marketing messages about value or worth

-Taking either one too seriously, and by natural extension, your opinions about them.  Forgetting that the whole silly thing should be enjoyable

Of course this list can apply to nearly anything; modern art and trendy food quickly come to mind.  My (almost five year old) son indicated his displeasure recently at a gallery when he told a staff member that "it looks like just scribbles and trash".  He was right.  I have always been an advocate for calling crap crap, even if you are the only one who thinks so.  The lone voice of dissent often kindles courage in others, occasionally resulting in a small vocal faction correctly yelling bull$h!t at the emperor's new clothes.

Posted by Yankee-Whisky-Papa at 8:53 AM 5 comments:

By the end of summer, the drink signal becomes sun-bleached, mildewed, tattered, and generally ratty.  I order a new set in the early spring each year (couple of dollars only) and start afresh.

A long-standing ritual in my family and house is that we dispose of the old one in solemn ceremony (in other words, we throw it into the fire haphazardly while drinking liquor).

The purpose of the "drinks signals":


During warm months at 5pm, we fly a cocktails flag outside of our city house, and welcome in for drinks anyone who presses the bell... anyone... which has been interesting.  I am the sixth generation to conduct this strange tradition, though the original burgee didn’t make it past the second.

It becomes an open house for anyone who has the gumption or friendship to press the bell.  You are invited up and given a drink.  Like generations before me, this 5pm open-door policy has resulted in some hilarious/interesting afternoons.  In some cases, it has been attended by the parents of friends who used to frequent the same event hosting by my parents and grandparents, long before my time.


We packed into the Sail Loft (a favorite sailor's pub) and we were able to fill the boxes with eighty-eight coats, plus hats and scarves.  The quality of coats was astounding and humbling (noted and appreciated by the organization's representative who attended).  I can't thank those who attended enough, and for those of you who emailed me telling me about your local donations.  A thanks to all of you and your generosity.

Of note was one young woman who had no extra coats at home, so she went to a local store and bought six new children's coats off the rack.  We had a diverse turn-out, and I'm deeply grateful for all who attended.  Phillip (a regular commenter to Boxing The Compass) and his wife were instrumental in the effort, and it would not have happened without them.

Bay Cove is directing these coats to programs assisting people in entering or returning to the workforce.  I do believe that enabling those who are able to participate in commerce of any sort will benefit everyone.  The large number of children's coats will likely be distributed within hours of me writing this.

I was in Philadelphia last week, and though the Mainline Sportsman was down for the count with the influence of influenza, I was able to have a perfectly pleasant evening with the gentleman behind the blog Brohammas.  We talked away the afternoon and well into the evening, and he was as adventurous with his willingness to eat strange foods as I was.  He's built like a fighter from rugged Western stock and judging by his build, he was likely an acute terror to his rugby opponents.  Saddled atop his concrete shoulders is a highly intelligent mind and an approachable personality.  A dedicated father and husband, he embodies the good side of being analytical and the analytical side of being observant.  We hit it off very easily.

How does this tie into the coat drive?  We talked for a while about barriers both real and perceived.  Lastnight, the representative from the coat charity told me that clothing is actually one of the more significant barriers to entering into the job market.  I will spare you my lecture about how local licensing and permitting deters budding entrepreneurs, but the clothing issue as a barrier is more real than I had realized as it pertains to the entry rungs on the ladder. 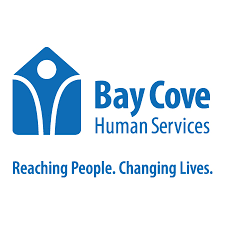 A friend/co-host/organizer put this together for the coat-drive.
Hope you can make it, or support one in your local area.

We sat (by the fireplace after work, each with a glass of Scotch), and agreed that we wanted little to do with raising money that would only feed administratively top-heavy "charities".  A coat drive was his idea, and I was immediately onboard.  I've bitched about this before, I know.  100% of coat donations will be made available to those who need them.  If you haven't worn it in two season, you likely won't miss it.

Posted by Yankee-Whisky-Papa at 1:00 PM 7 comments:

What Does Charlie Wear?

In Boston, our subway system updated to electronic swipe cards several years ago.  When I was in college, the fare was 85 cents which held unchanged for years.  The Kingston Trio rightfully decried taxation, but griping about transit is never on my list of things to do.  I still have many of the old tokens which are destined to become cufflinks at some point.

If Charlie, who was named after the old song Charlie and the MTA (I was required to not only memorize the lyrics, but be able to sing them as a child... true story) is the quintessential T rider, I think we might be in good shape.  Notice his suit's beautifully pressed pants with hefty cuffs, two-button jacket, and button-down collar.  For some reason, he has contrasting buttons on the collar, but no matter, he's still well put together.  He also travels with a hat and apparently a positive attitude and a predisposition for favorably rating that which surrounds him.

Since our business districts are still very formal (especially the financial and legal sectors), it's no surprise Charlie is well dressed.  When he goes casual, all may be lost.  Stay well-dressed, Charlie.

[Or, How To Make A Bad Sandwich Out Of Otherwise Good Ingredients]

Two bloggers (who hate one another) simultaneously alerted us to the closing of Ralph Lauren's Rugby line in their blogs here and here.  I thought that I would offer a more sarcastic and mocking tone towards the Rugby brand.  If you ever wanted to be a Ralph Lauren designer, here's how:

Start by wearing something normal.

Now, add a tie to let people know that you go to a preppy college
where ties are somehow required or normal on campus in the year 2012.

A rugby shirt over the whole thing lets people know that you are also a jock
who can be counted in for any pick-up game on the fake quad during a picturesque autumn.
The rugby shirt will protect the tie and shirt, I suppose, if that ambitious kid tries to tackle you.
"Damnit, Clayton!  I said two-hand touch!  I don't want grass stains on my chinos!"

Now, it's back to the main campus hall where jackets are also mysteriously required.
Not enough time to remove your rugby shirt?
No problem, put your heavy herringbone tweed (with severe taper) over that.
Alternative: corduroy jacket with elbow patches for more allusions to mythological academia.
Even dumber alternative: hooded sweatshirt instead of rugby shirt

Should there be a dusting of snow, a quilted jacket (practically a uniform these days) can be put over the whole thing.  It looks stupid, you say?  Correct.  While the layers may bring your internal temperatures to a near-boil, you can at least be comforted knowing that you are unable to move beneath it.
This won't be a problem because you'll be standing in poses all day
hoping that you get photographed by someone for a blog.

Nothing says rugby like a scarf.  I suppose I should have used an
oversized striped one for this, but this will have to do.  My God, this looks stupid,
and I'm in my mid-to-late thirties.

Now you are ready to stand unnaturally contrapposto, hold a football or bundle of books like Doryphoros, or gaze stoically with your chin and heavily combed hair aimed at the horizon.
Extra points for tucking the sweater and rugby shirt into the belt of your jeans,
and let's not even talk about socks, the ubiquitous Jolly Roger, or the false sizing labels.

[None of the above garments are made by Ralph Lauren.] 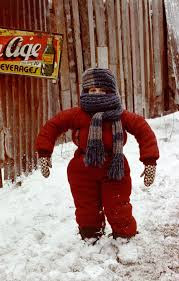 This is not the first time I've humiliated myself for the blogs benefit.
Posted by Yankee-Whisky-Papa at 8:53 AM 19 comments: