What is Really Worn - Behind The Curtain's (Social) Fabric

Writer's Note: This post is largely in response to several emails I received containing angry and near-dogmatic understandings of the importance of dressing.  Most of these partially venomous screeds theorized correlation between tie and pocket square wearing to some non-existent ghost of "the Gentleman", with a naive impatience for those who conduct themselves differently.  While I love finding, buying, wearing, and thinking, talking, writing, and reading about more formal clothing, I do prefer to keep it in perspective.  The beauty of the human soul and spirit are quickly consumed when devoted to keeping one's outward self alight, leaving the eyes window to a spent and desolate core wrapped in a fussed-over presentation of grooming and bother.
****** 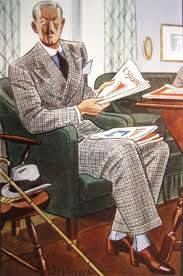 Catalogs, websites, blogs, commercials, and television would like us to think that worlds exist where the aesthetic is unblemished,  the mood is just so, and people dress to the most picturesque end of the spectrum as possible each moment of the day.  In reality, there are no set-designers to provide rich low lighting to walnut panels, no costume designers to bulldog clip the waist of the jacket to give it a drinking-straw taper, and no casting directors to ensure that the event will be filled with tall slender/chiseled models to provide the cocktail chit-chat which we imagine they are capable of.  If you watch television or go to the movies, you will be certain, CERTAIN, that the intelligence apparatus of each federal (or even state) agency is staffed by models who dress well and gaze analytically at state-of-the-art technology with desks and floors that are modern and back-lit.  In reality, desks, computers, filing cabinets and coat racks are all purchased from the near-lowest bidder on a commercial procurement, which until recently, had largely remained stagnant with Steelcase-type furnishings and fluorescent lighting.  Only recently have our federal agencies allowed themselves a much-needed and well-deserved sprucing up, with windows, carpeting, and  more human lighting, finally bidding farewell to the remaining 70's/80's furniture and style that certainly provided no dignity to its users.

While the college experience is available to more people now than ever, the myth of the heavily tweeded and flanneled bow tie academic may be dying somewhat, and we no longer expect to see cardigans under herringbone jackets with patched elbows.  If you want to bring back these styles with academic halls, simply discontinue heating in classrooms and offices, and you'll likely see more heavy woolen suits, sweaters, and tightened ties. 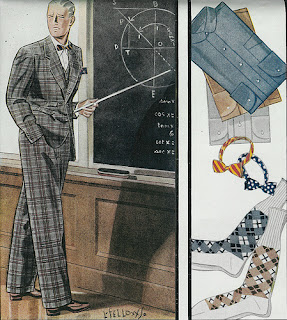 Other images that we tend to carry around are also inaccurate (though charming). 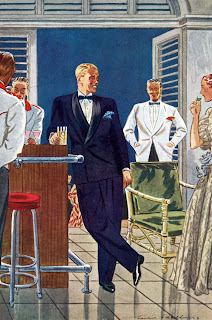 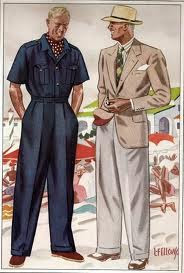 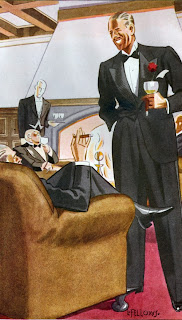 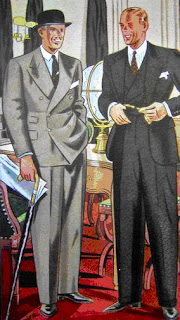 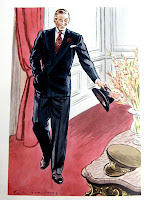 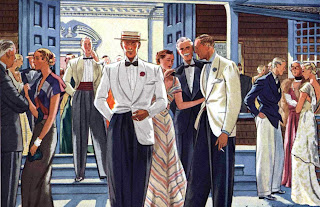 Image: Navy double-breasted blazers, white pants, Bengal striped shirts, yellow ascots, yachting caps (seriously), ribbon jackets, anchor patches on blazers, and bold primary colors, drinking rum or Champagne.
Reality: Gross sailing clothing for those recently afloat, sun-faded shorts and shirts, baseball caps, sunburn, ratty sweaters and sweatshirts, bucket hats for the oldsters or headwear with under-the-chin drawstrings, white-soled tennis shoes or Top Siders, khaki shorts, and jackets which seem too warm for summer but are appropriate away from land.  If it's an evening event, blazers, khakis, and ties, with very occasional yellow cotton sweater vest with boat shoes.  Watery American beers are favored, as most guests are already dehydrated from sailing, swimming, and summer sun.
There seems to be an (understandable) assumption that were a young man to enter one of these clubs or organizations as a guest or new member, that the existing membership would scrutinize and whisper details of the young man's wardrobe with one another.  It simply does not happen.  So long as the dress code is met, other members are more concerned with making sure you're not there to "network" and whether or not you are holding your liquor well.  That is not to say that each of these clubs don't have a few members who dress in handsome and noteworthy assemblies, but a yacht club is about cruising, racing, or teaching your kids to sail or swim, and not about wardrobe.


Where it may have gone wrong

Because most of these organizations are populated by middle-to-late-aged Baby Boomers who brought us the 1960's rejection of decades of formality, there is often little pleasure taken in dress code adherence.  Weddings and parties rented out to people unaffiliated with the clubs usually have better dressed guests that the club members themselves.  The same demographic that invented and implemented indulgences like "casual Fridays" has no interest in the formality of those who survived the Depression and the Second World War, and possibly resent it.  This voting block ushered in Country Club by-laws establishing "casual dining" and "grill room dining".  The sad result is that jackets and ties are left only for the "Main Dining Rooms" which once required reservations, but are now thinly populated and pleasantly without televisions above the bar.  A note-worthy feature of a restaurant these days requires pants in non-denim and with dress shoes, and a sleeve or jacket requirement places a restaurant at legitimate risk of bankruptcy.  Certainly most eateries should NOT have dress codes, but when a clothing standard is dangerously close to a business death-sentence, it points out that perhaps we have gone too far in one direction.  Considering too, how many actual cultural restrictions of conduct and custom we adhere to in restaurants, hostile resistance to clothing requirements seems infantile and overly precious.
For those in their 30's and 40's (roughly), childhood was still formal, shorts were not for church, dinner, restaurants, or birthday parties, and visiting the Statehouse on a field-trip was a solemn event for which one dressed respectfully in whatever they owned or could borrow.  This same demographic is now perplexed by the shift in parental formality, and while most embrace the the new relaxation from that which once ruled them, judging by the niche blogs I read, a small and dedicated array of younger men and boys have turned the tables on the new casual-dress attitude of their parents, often to the delight of grandparents who worked in suits their entire careers.  I hear it steadily in emails, including this quote from a 32 year old son of two university professor parents:


Law and finance still dress well by culture, but don't expect healthcare to get out of their pajamas, preferring surgical "scrubs" regardless of whether or not they will be anywhere near the operating room.
There is a legitimate argument to be made for aesthetic value, but that is different from the idea of tradition and a false sense of propriety.  The trap into which many young men fall is becoming too vocal a jerk about it, jamming it down the throats of everyone within ear/eye shot.

There will always exist the risk of aesthetic nostalgia leading one towards costume or near-parody, and taking the time to choose and assemble ones daily clothing separates people only to the degree that hobbies, personal incomes, or music preferences are perceived to do... a shallow and pitifully thin common-thread with no correlation to personal quality, manner, or conduct.  I get disturbingly misguided emails occasionally from male readers in their 20's and 30's who I can only assume have alienated those around them by their costume approach to dressing, forcing attention towards themselves for their ascots and bowlers (you should see some of the photos I get), their cargo-pocketed mono-chrome kilts, or their long fur coats and canes (!).  Too much is often assumed by those dressing well, and when the magical "access" fails to materialize, the flood of "exclusive" invitations don't polish the mail slot, and the nasty social agenda isn't realized, they end up embittered and unpleasant with a nice wardrobe being their only feature.
Posted by Yankee-Whisky-Papa at 6:07 PM