Are You Being Served?

It's very likely that you're not.  Few are these days. 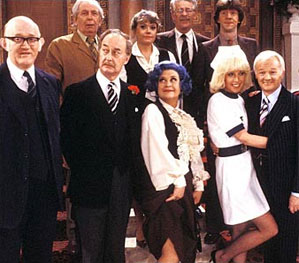 Some of the shows I watched as a 10 year old, I still love today.  Perhaps if we had more Magnum/Higgins and Capt. Peacock/Mr. Humphries on television, style would be a bit different.  As much as I try to avoid waxing nostalgic on the ol' blog, I can't resist certain elements.  Netflix has available the DVD's for Are You Being Served?, and they are as dry, lovable, and hilariously steady as I had remembered.  Of course, the show had its own spin-off, (Are You Being Served? Again!) which still contained the great core-shenanigans, double entendre, and predictable and awkward angles of the first, with more than a hint of the sad, salvaging desperation of a spin-off.  Despite the painfully accurate send-up of Anglo status-consciousness and the paranoia of class anxiety (including corporate hierarchy) the clothing was a bizarre time-capsule of an era that ended just as that show began. 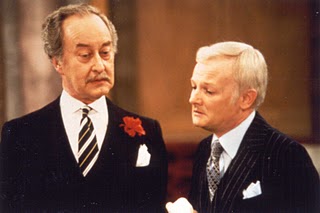 Class-anxiety transcending friendship, and occasionally, vice-versa.
Frank Thornton's character, the perpetually fuss-veneered Capt. Peacock, wore the exact same assembly every day (including the stroller), and the flower was "purchased daily at [his] own expense".  However, when they left London to reside in the countryside, the cast shifted into various strata of country clothing.* 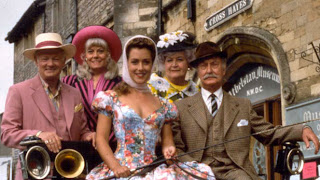 Here, Capt. Peacock's "country suit" is fantastic, and still more formal than the majority of city suits seen today in the US.
When the entire floor was required to participate in ballet to foster health and fitness, the ever status-anxious Capt. Peacock showed up in black tights, a rugby shirt (thankfully untucked) and an ascot, shooing all but his superior from his warm-up bar which was "reserved for management only".
I  always enjoyed the original (including the early black and white), and noted even then how Mr. Humphries would pin his tie under his vests/waistcoats to lift it, creating a subtle convex display.  While some of the wardrobe cuts are outdated, the overall mode is as permanent as can be, and the show represents the end of an era (both good and bad), serving as a snapshot for the (possibly last) moments that Anglo and American culture teetered on a coal-fired, leather-soled, presentation-at-all-costs era.
*To avoid a larger post, the "city vs. country" rule for clothing is largely irrelevant in the States, considering that a country Prince Of Wales Check suit with a blue shirt, spotted or noun tie, and brown shoes will still leave the wearer more formal than nearly all of those in most US cities.
Posted by Yankee-Whisky-Papa at 3:16 PM