If you enjoy a stroll through the woods in New England, you will likely find stone walls. A very short moment in each year is the harvest.  Mechanized now, the harvest was once a near-panicked and frantic race for many seasons.  Making hay is even a risky venture with New England weather.  I occasionally bird hunt in up-state New York amongst the cleanly-shorn fields where some of the migratory birds glean the errant grains from the ground.

The labor is poured out, elbows and backs wear down... some will never be the same.  Toes and fingers are crushed, and shoulders on men both young and old pinch during a pre-dawn stretch. In April, it's still cool enough for hard work, and there won't be too many biting insects.  Burning stumps and brush tend to smoke the clothing, and at the end of the day, the clothes are better kept by the door instead of in the bedroom... it goes back on the next morning. They smell, but it's the arms and joints that complain the loudest.

Then... the field is used as intended... grazing, agriculture, hunting... if children find dead animals they poke them with sticks.  Season after season of harvests. Relatives and neighbors are brought in to pike and rope the assembled beams on a new structure... treenails are commanded home and Mother brings out sandwiches cut into triangles while water is gulped from ladles or tankards.

Years later, Father dies after a few years of being a grandfather.  Mother goes ten years after.  The children have moved to the town with the grandchildren and the cousin takes over the farm.  His ruined shoulder kept him out of the Great War.  He scales back the production and leases more out.  Buildings start to age, and the barn roof will go three seasons too far, first bowing, then sagging, and then opening up.  Equipment rusts away and wood rots away.  The land is long since grazed, and saplings take hold like bacteria besting a neglected wound. 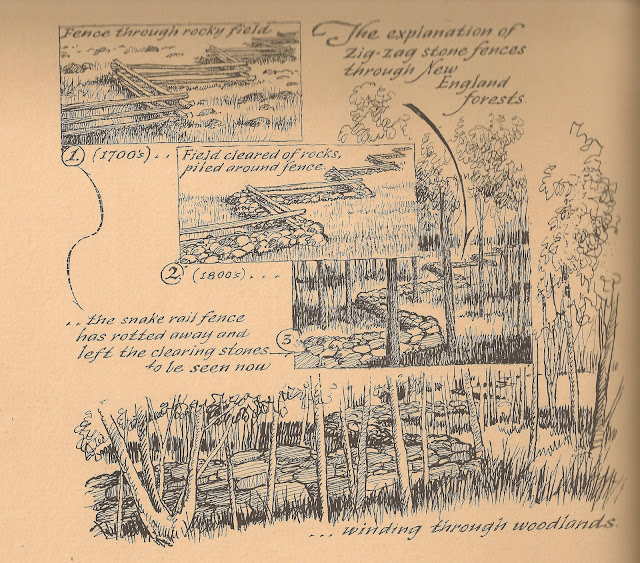 The land returns to forest, and the cousin, now elderly, occasionally walks the stone wall, remembering his childhood and the seasons of building it.  He saw a bear a decade ago, but not since.  Coyotes are returning. He remembers his uncle sitting on the wall smoking a pipe, he remembers acorn-throwing play-wars with the other children, and he thinks he remembers hiding an old pocket knife somewhere in the stones.  What was the hen's name?  The milk cow was named "Seffa".  Everyone and everything has changed, nieces and nephews rarely visit or write, and the others are dead.  The wall has held up better than any of them. Those damn stones. A nice young doctor from Concord wants to buy the land... thinks he'll start an orchard. He must be as dumb as the wall itself.

All photos are Eric Sloane illustrations.
Posted by Yankee-Whisky-Papa at 9:13 AM