The months of September and October have held an unhealthy frequency of travel all across the country.  Between business, weddings, and visiting friends, non-stop moving is taxing on the senses.  Beside the indulgently bad behavior on full boil at airports, the modern man now falls victim to the ease of travel he once demanded.  Being home these months is closer to a starboard/port watch (starboard/larboard for you very old-timers), with twenty hours in each city, then home for twenty.  I was tempted to post many of the pictures I secreted of 50-somethings with large cellphone-connected ear apparati wearing the ubiquitous jeans/white running shoes/golf shirt get-up of typical suburban splendor, or the scuffling 30-somethings in their athletic wear, but I realized that I was just getting a bit too punchy and mean-spirited from the heart-rasping explanations to my son about why I had to pack a bag and leave again, and why I had to go alone.  Thankfully, a resolute Mrs. continues the Naval regularity of the household in my absence.
Screw it… here’s a picture from the airport. 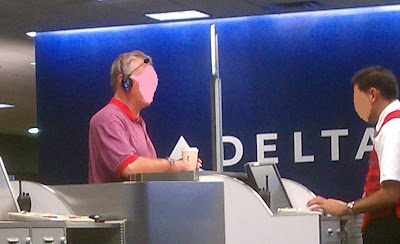 Mouthpiece lifted up for conversation... how courteous.
Several weddings which included fully kilted gentlemen and very relieved parents of both parties also provided a half-dozen female friends from childhood who have aggressively rebranded themselves for reasons known only to them.  Maggie, Susie, and Kate did not welcome my addressing them as such, letting me know in no uncertain that they are now Margaret, Susan, and Katherine.  Eventually they gave up once they were surrounded by several tipsy long-time friends who had no interest in relearning their new names.  Older relatives caused bristling by also refusing to address “Bets” as “Elizabeth” even during toasts.  I would have no reservations hiring a “Bets” to handle a lawsuit, negotiate a purchase, or to tell me to remain silent while she explained to the inquisitors that I have “no comment” on the matter.  Thankfully, “Cam” had no desire to rename himself “Cameron”, and Matt and Doug were also fine with the shorter childhood versions preferred by relatives and coaches. 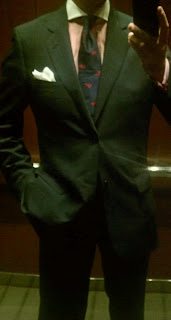 I was the sketchy guy in the elevator en route to a reception taking pictures of himself.
During one trip, I had the fortune of time to make a detour to visit fellow blogger Mr. Midwester.  Those who follow him know him as the most generous gent around the men’s clothing angle of blogging.  He happily mails out impressive finds from his cache of clothing finds (postage paid) to those who ask.  I have several ties and a particularly poppy (4th-hand) jacket from him, and our correspondence has always been genuine and disarmingly nice.  The best part about him is that there is no catch: no hidden agenda for giving away the free stuff, no weird ambition or angle, and nothing other than what he says.  In a cesspool of marketing, branding, and concealed blog shilling and fakery, he provides a trustworthy plain truth and a revelation that neighbors can now exist across state lines.  He is a new father to a gorgeous baby girl (whom I had the absolute privilege of holding) which has occupied his time these past few months.  I took shameless and cheap opportunism to visit some of the thrift shops in his city (since he is now devoted to hurrying home every day) to glean a few items that his absence had allowed to remain on the racks.  I only had a total of three hours before I was off to the next city, but it was well worth it.  He somehow finds clothing that fits him extremely well, which seems improbable because though I am over six feet tall, I was barely at eye-level to his chin when we shook hands for the first time.  I wish we were actual neighbors. 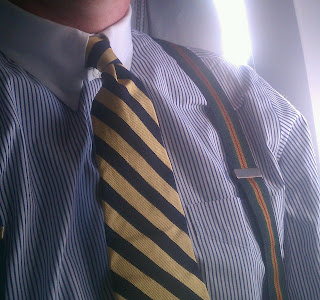 One of the ties Mr. Midwester sent me... Brooks Brothers... worn on the flight to Chicago. 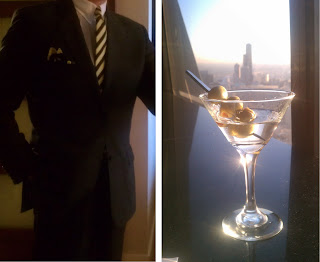 A touristy spot enjoyed.  1000' high gin.
Thanks for a fun (though brief) visit, and for hosting me in your town, Mr. Midwester.  Great curry, too.
Posted by Yankee-Whisky-Papa at 8:44 PM