There has been a bit of talk about the velvet slipper lately. I have always known them as Albert Slippers. This is the same Albert whose son, Edward VII is the person (it is said) for whom we leave the bottom buttons unfastened on our jackets, sweaters, waistcoats, etc. I have generally been happy to see them worn in familiar settings, venturing outside of the house (the club, familiar parties, friends houses) during the colder months, but have noticed men wearing them around the sidewalks as loafers. Wearing them in one's house is always right, and to wear them to a party (because one's snowy boots are left at the door) is both easy and a nice tribute to the host, indicating your comfort with the setting but still honoring the event. I also enjoy seeing them with black-tie, again in more familiar settings. Green, blue, wine-red, and with nouns embroidered on the toe are all acceptably daring. I am not quite ready to see them on the street, though... that is for the loafer, not the Albert house shoe. Since the soles are usually thinner leather, wooden floors and rugs are the only surface suited for them under foot. I recently acquired a new pair from Del Toro in Palm Beach. They make a solid black slipper in velvet, usually around $125. The gents there have expanded into embroidering and expanded color selection, and I got one of the early prototypes from them: black with pheasants on the toe. They are certainly far less expensive than Shipton & Heneage at $500 or so, and John Lobb asks around $6,000 for their bespoke models. Other makers include Trickers, Charles Gale, Stubbs & Wooton, Bowhill & Elliot, and Church's. The Del Toros have suited me perfectly, and are obviously very comfortable. Brooks Brothers makes a pair for around $200, and Ralph Lauren offers them at almost $900. One hilarious aspect to the Ralph Lauren models is that they only offer them with their logos or the initials "RL" on them. I think that Brooks Brothers also offers "BB" on theirs. If you are going to the trouble of getting some nice Albert shoes, at least have your own initials (or family member's) on them. The Del Toros fit into the umbrella pocket on the inside of my long winter coat, so they are easy to bring along to parties during the winter. 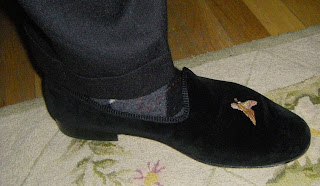 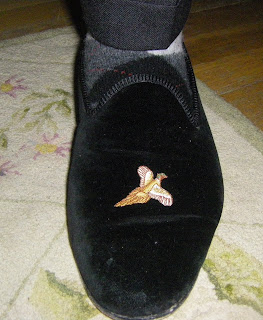 The Albert house shoe is a good idea, but they are not loafers. A quick dash across the street to the butchers, or visit the neighbor is the extent of their outdoor use. In a familiar setting, they tell the host that you are comfortable at their party, but that you still have the sense to dress. One short note about the emblem: since the majority of them are English versions (obviously the originals), they usually appear with crests or marks of the royal family on them like crowns, ostrich plumes, etc. It is usually inappropriate for any U.S. citizen to wear these images, unless they do so in specific and verifiable tribute.
Posted by Yankee-Whisky-Papa at 9:12 PM