Sirs,
If you have the time, I thought I'd ask your opinions about formal wear. I recently acquired a trim, white dinner jacket with peaked lapels that I consider to be of excellent cut, but now I confess to some confusion over how to next proceed. Well, the obvious next step to to pick up the right pair of black trousers -- easy enough. And I already have both black and white ties. But I am a little tripped up over shoes and shirt -- most tuxedos I have encountered in life have been of the rental variety, and without a proper model I find myself (with eyes cast down) fumbling with the details. For example, must shoes be of patent leather? Is it permissible to use, say, a conventional white shirt from Thomas Pink with black or white silk links? I'm sure there are other concerns I am overlooking, but for now let's start with those. Let me say that I am also on a student budget.
Thank you in advance for your help with this embarrassing problem.

As for shoes, patent leather is increasingly less required. In fact, the other night as I hosted a black-tie dinner at the club (debuting my new ivory colored dinner jacket), [name withheld] arrived to the foyer, and immediately changed into his navy blue velvet Albert shoes with gold monograms... to stunning effect. Having gone patent leather for years, I now wear highly polished Allen Edmonds with black-tie most of the time because like the silk-knot, they provide a tiny edge of easiness to the look:

The key is a nice handsome shine. Wingtips have been traditionally forbidden, but I am actually coming around, as I find it more daring, and often seen in the arts world. Monk-straps are out, though if you throw on some crazy red argyle socks, it may work (the loud sock/nice suit tradition is a favorite membership guaranty to the London arts crowd). There is also something extremely nice about an old-school opera pump with black-tie, which used to be the norm: 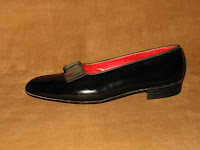 I'd start by going to tuxedo rental places and asking to buy a pair of proper trousers (used, of course) with at least some wool content. Now, as for the shirt, a plain white shirt will do, until you can get a proper turn-down collar shirt (more versatile) with a textured bib. Once you have that shirt, your next one should be a winged-collar. In all cases, French cuffs are the choice. I actually prefer to wear silk knots with my dinner jacket, instead of the metal types, and I match them to my pocket square (the plainer, the better for black-tie). I also rarely use the studs for the front buttons.... both of my shirts came with a ribbon with the buttons attached, which is what I wear. Brooks Brothers actually make a decent shirt for this.

My personal thoughts -
Shoes: Shiny patent leather. I wear wing-tips with suits, but I have shiny patent leathers that only come out with the dinner jacket.
Shirt: White wing-tip formal or lay-down formal. I prefer the wing-tip. Anything else says, "I don't really care/know enough to wear a proper shirt."
Tie: Black, unless you have full tails.
Vest: Avoid.
Avoid trendy variations. I was about to go on at length about trendy vs. traditional, but we can bring that up in a later discussion.

-White ties ought only to be worn with tailcoats, as Florida Panelist aptly notes.
-A white dinner jacket such as Norway's is unusual, already a breach of strict tradition, but quite in the spirit of the Tuxedo in general in that it is a simplification of full formal attire, namely white-tie for the evening or morning dress for the day, both requiring very specific trousers, jackets, shirts, waistcoats, shoes, hats, etc., and both almost useless in the present day. The dinner jacket allows a greater degree of freedom so long as an atmosphere of (sub-ambassadorial) formality is evoked. (Ambassadorial requires white tie.)
-The jacket should nevertheless be single-breasted, single-buttoned, with peak or shawl lapels both acceptable. I prefer shawl in principle, as a reference to the relaxed smoking jacket from which the dinner jacket is derived. Notch lapels smack of the business suit and thus have no business at a formal event.
-For even semi-formal event attire such as black-tie, one needs a shirt with a standing collar, for the same reason that the jacket ought not have notched lapels. It ought also have french cuffs, and studs in front rather than sewn buttons. I lean away from any frills, pleats, or other decorations on the shirt front, though.
-A vest may be worn for full effect, but it must be the right sort of vest, of the same material as the jacket and with a formal cut. The chance of laying hands on an acceptable vest is quite limited unless you have your own tailor. Failing this, I think the old imperial Anglo-Indian cummerbund is still quite good, though it should be of limited width and black in color. Bonus points for wearing one actually procured in India.
-The trousers cannot have belt loops, as Boston Panelist notes. The piping or braid of silk or satin running along the leg seam is not absolutely necessary, but is a safe choice.
-My age compels me to side with Boston Panelist and not Florida on the matter of patent leather: as long as the shoes are black closed-toe oxfords with leather soles and a good shine, this is enough. (Though as a historian I regret the passing of the opera pump, I think it would be excessive to pretend that it has not passed out of use. Real patent leather made with linseed oil would be grand, but these days nearly all patent leather is made with a plastic coating substituting for the linseed oil treatment. Patent leather may remain the standard, but there is now room to depart from it and remain a gentleman.
-Not sure about whether the shoes may be brogues, i.e. wingtips. Depends on the occasion for the attire, I guess. Something entirely festive, maybe so. Something more honorary, probably not.

Finally, I love the idea of going to a club dinner or private party or other only nominally semi-formal event with a further slide toward private house attire, as in the example of our [name withheld]'s shoe swap. What would you think of the jacket sliding into the formal end of smoking jacketness, or of replacing the bow-tie with a black cravat secured with a pin? Actually, this last is potentially even more formal than the bow-tie, and could more easily be worn with a tailcoat. I'm very tempted to try it some day.


Posted by Yankee-Whisky-Papa at 9:16 PM