As I buttoned the top button of my shirt, I noticed the fraying was getting a bit worse, and reaching the ends of my collar tips and cuff edges. French cuffs tend to wear out at the outside fold, and it seems as if barrel cuffs wear evenly, and around the outside edge first. In the past, I had recycled the shirts by cutting the back panel out, hemming it, and making a nice pocket square from it. I checked my closet, and realized that there were about six shirts which were all reaching the same level of collar/cuff fray. The collars wear out on the tips (even on cutaways and spreads) and the back turned-down ridge (or "spine") of the collar. Since the shirts were mostly nice shirts (T.M. Lewin, Thomas Pink, Turnbull & Asser), I cringed at the thought of taking scissors to the back panel, and popping off the mother-of-pearl buttons to save. What to do?
I found a shirtmaker in Wellesley, and took a car out to see them one Saturday. I knew that matching the patterns on the fabric would mostly be impossible, so I decided to have the tailors replace the collars and cuffs with a conservative white collar/white cuff theme. Two of the shirts were white background with butcher checks, one black (almost a windowpane) and one green (a Brooks Brothers shirt). The other shirts were two striped numbers, and a solid blue one.
The tailor, Harry (320 Washington St. Wellesley) showed me books of swatches, and a lightbulb flickered on in the dusty attic of my brain. Blue fabric for the collar of the pink striped shirt! White for the blue shirt (not too daring), and the green butcher check? With the tailors blessing, I stretched out my boundaries a bit. I started out with the blue one. Here the original collar and French cuffs are shown next to the new attached set. 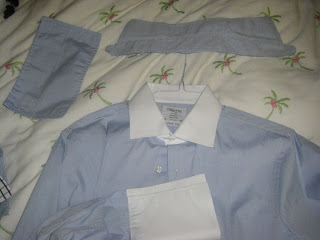 A standard shirt. I went next to the striped shirt I had. The barrel cuffs were replaced with French cuffs, and the collar was replaced as well, both in a light blue to match the pink and blue stripes. 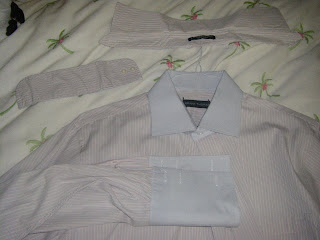 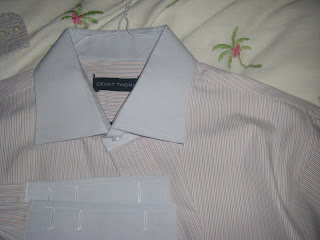 Not bad. My next shirt was the green and white butcher check from Brooks Brothers. It was a middle-of-the-road quality barrel cuff with a spread collar. In the swatches, I found a nice herringbone blue. 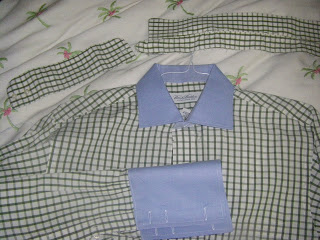 I was feeling a bit liberated, and the approving nods from Harry the tailor encouraged me further. The above shirt could be worn with a suit and a tie in many business settings, but I was getting close to the edge of what could be pulled off. When the Thomas Pink shirt with the thin butcher checks and cutaway collar was put on the counter, I decided to take this shirt out of the rotations of business-acceptable, and toss it into the cocktail party category. I found a very tight lime green butcher check that was different in size enough to be interesting, but similar enough to be daring. The color was outlandish, and the with the cuffs, it was almost overwhelming... almost. Again it is pictured below with the original French cuffs and cutaway collar. 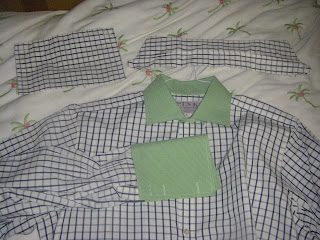 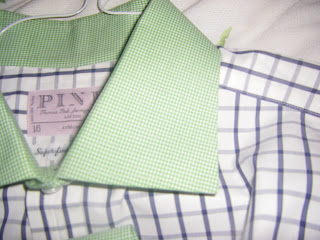 I could almost imagine the looks when wearing this with with a navy blue tie with little nouns on it, blazer, and light gray flannel pants.

The tailor gave me one shirt back incomplete. He correctly pointed out that the fabric was simply too worn to reattach new components. It WAS a high mileage shirt, but he included the cuffs and collar (pink) anyway. It was a shame, but I realized that I had another fit that could work out in the future. The Turnbull & Asser shirt had three-button barrel cuffs (which were a bit of a pain). Putting on the shirt meant buttoning three buttons on each wrist. 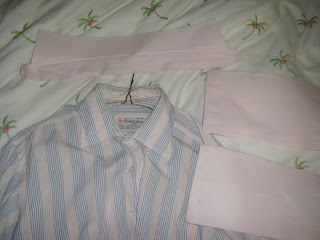 I decided to keep the cuffs and collar (obviously), and to turn the worn-out shirt into a pocket square and handkerchief. In my closet, was another older Brooks Brother shirt that I thought would look good with the pink cuffs and collar, since the Turnbull & Asser one was unrepairable. The good candidate was a tight butcher check in blue with barrel cuffs and a medium spread collar. In the below picture, I was trying to imagine what the shirt would look like with the pink French cuffs and the new pink collar. I wrapped it around the existing collar, and I thought that it looked pretty good. 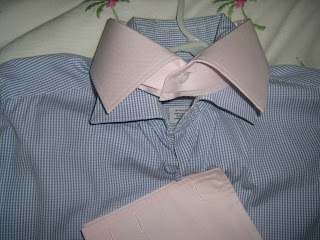 The last step is cutting off the old buttons from the barrel cuffs and from some of the collars, since they are all mother-of-pearl, and I'll toss the scraps, or retire them to the shoe polishing box.
Posted by Yankee-Whisky-Papa at 8:20 PM