As the holiday season approached, I took the usual path of breaking out my various pairs of pants with nouns embroidered on them. Of the various pants in the drawer, my favorite is a pair I found about 13 years ago at a thrift store in Hyannis. I think that I paid $4, or so, and an examination of the sewing indicated that they were bespoke. Bottle green corduroy, with little water fowl all over and a sturdy cuff, they have literally elicited curse-laden heckles from men in trucks driving along the streets of Boston. 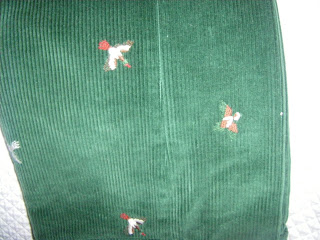 I realized that I needed a pair of shoes that were as interesting as the pants for wearing around the house (but not out). I have several pair of Allen Edmonds shoes, which I find to be generally excellent in all ways, and I thought I should stick to them. I wanted to make a slight mockery, but still be with in bounds of reason, so I realized that I would be modifying the shoes slightly. I have always disliked the tassel loafer, and find them to be ugly all around. Low vented, and usually an after thought, they more often than not ruin a good ensemble. What better shoe to modify than the cursed tassel loafer? Since I would be wearing these shoes about one month per year (Thanksgiving - Christmas), I was not about to buy a new pair from Allen Edmonds ($300+). I found a pair of Allen Edmonds in my size on Ebay for about $10, and they were in near perfect condition. 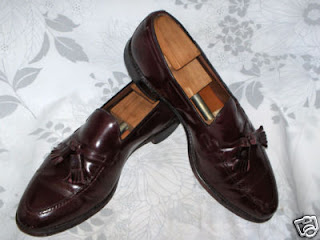 They arrived, and I set to work. A $1 length of green velvet ribbon, and 2 gold colored nautically themed buttons for about $1 would be the tribute. I happily cut the tassels from the shoes and unthreaded the leather strap through the heel. I easily replaced it with the green velvet ribbon by rerunning it through the holes and tied an ostentatious bow, securing the gold buttons at the knot. 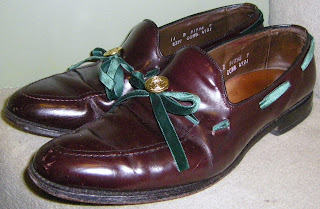 A quick polish, and they were unique enough to try out. During the maiden voyage (Thanksgiving) they seemed well-received, initially to widened eyes. Since they were good shoes to begin with, the comfort was instant, and they made the perfect Holiday house shoe. Combined with the green water-fowled pants, they fit right in. Perhaps they are a perverse tribute to the opera pump, but the Holidays are good times to pull off that sort of thing, surrounded by friends, and usually indoors.
Posted by Yankee-Whisky-Papa at 8:22 PM