On The Farm and In The City 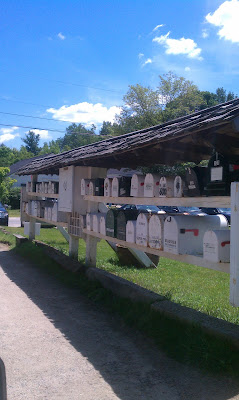 She grew up on the farm, the fifth child and the only daughter.  Her grandfather built the farm and the massive and very beautifully detailed thirteen bedroom farmhouse.  He did not have it built… he built it, from the posts and beams and purlin roof to the modest trim and paneling inside.  Her parents had moved permanently to their large “cottage” on the coast of Maine, and now she and her husband raised their three young children in the house and on the farm.

After college, she inexplicably joined the Navy and served for four years actively and then just as long in the reserves.  She met her husband at the US base in Spain, who was also an Ivy-league athlete.  He was from a rural Vermont town and they got along quickly, with an equally quick marriage at the end of his service (a year before hers).  They both eventually moved to her New Hampshire family farm (the parents were able to convince at least one of the children to occupy the house) in search of familiar comfort and sensibility.  The farm ran itself from productive acreage leased out to people who pursued it fully, and the husband could focus on his legal profession and the wife could raise the children and occasionally lend her civil-engineering expertise to the State.  The property has always been truly picturesque, complete with the (characteristically New Hampshire) inflated property taxes and woefully neglected secondary roads.  The majority of the growing and animal care was performed by an actual farmer, his wife, and their hired workers who all lived in a detached care-takers house.  The use/payment arrangements were unclear, but it seemed to consist of limitless food and crop for my friend and her family.

We were childhood friends from her summers on the coast, now both with children of the same age.  She was a rambunctious athlete as a young girl, threatening in her ability, but sweet and honest in her manner.  She hated tennis lesson as I did, but unlike me, she was an excellent player.  We raced dinghies together as an unbeatable team, and she taught me how to jump from dizzyingly high bridges into salt water.  Her drawbacks included her four protective brothers, one of whom was sinister in his innate authority (now the ruthless director of a large American corporation).  He tolerated me because I never dared interest beyond “buddy” with his sister.  Her least charming quality was her motivation though.  She had too much to be properly mischievous, and it made her observe a maddeningly early bedtime.  Worse yet, she always studied for at least one hour a day, even in summer, and no fewer than four during college.  When I was sixteen, during a summer ball, I discovered that she was both tone-deaf and a horrendously bad dancer.
---
My wife, son, and I stayed in the back portion of the big house for our visit during a notably beautiful weekend.  After a five o’clock dinner of fresh salads and cumin-roasted pork loin, the exhausted children were bathed together in an enormous iron tub with oversized car-sponges and then put easily to sleep.  Though bedrooms were in huge surplus, her three children slept in two bunks in a single room, and our son happily took the bottom bunk to even out the numbers.
At eight o’clock, our host and hostess turned in for the night after serving only one round from the bottle I brought like a couple of one-drink Cinderellas.  The sun was just down but the evening was still readably light, and Mrs. and I took this cue to realize that our friends would be awake at some offensively early hour. 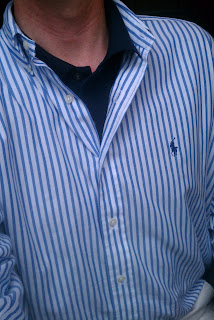 The shuffling around began at four thirty in the morning while the summer light outside was still deep blue.  The children were roused later at six for their symbolic "chores": checking on chickens, counting the goats in the barn, etc.  Our host was in his study putting an early billable hour or two behind him.  Because it was a functioning farm with no issues regarding the consumption of its animals, I strolled down the hall towards the brick floored kitchen expecting the aroma of eggs and bacon.  I caught none, not even toast or coffee.  I walked into the kitchen and all of the children were already sitting around the large table eating their bowls ravenously.  A salad of ice-cold watermelon, fresh (homemade) goat cheese, and raw honey (from combs forty feet away) piled in each.  A few mint leaves were thrown unpretentiously in as well, and the children drank iced black tea.  They were shirtless and making horrible slurping gratifications in the warm summer kitchen as they knelt on the seats over their breakfast.  When the bowls were emptied, they were told to go “directly to the pond” instead of any kind of napkin, and they sprinted out across the lawn towards the pond, back within moments of half-giddy screeches, still dripping wet and wide-eyed.  It was quarter past six in the morning on Saturday, and within two hours, one of the children threw up from an overly-zealous consumption of blackberries from the bushes in the back garden.
The lunch of herb-rolled fresh chevre (“Chevy Cheese” as her children called it) was accompanied by tea and giant slices of homemade toasted bread and cold lamb.  At my urging, we later fired my host’s functioning musket, and then all watched as our hostess sutured a wound on one of the goats (unrelated to our musketry, of course).  My wife and our hostess spent a few hours in town and returned with about ten fresh trout for dinner and the children gathered greens and herbs from the garden.  Mercifully, the mosquitos were mild, and we had more iced tea on the back porch as the children watched with mixed reactions as the house cat slowly tortured a sparrow it had caught.  Another five o’clock dinner, this time with trout rolled in salt, pepper, and butter, then broiled, and served with fresh greens and some homemade feta. 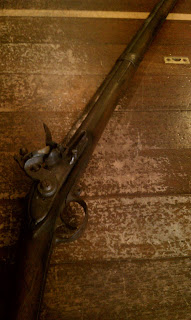 The next morning, my hostess remembered my passion for a full breakfast and put together a proper farm-fry of eggs, bacon, buttered toast, fried tomato, and coffee, with a separate platter of breakfast pork.  I stuffed myself to the point of near-stupidity and she dug out some humiliating photos from our camp years, one of which included me dressed as The Big Bad Wolf.  My wife roared laughing and accurately jabbed that I looked more like “an emaciated Playboy bunny” with my drawn-on whiskers, furry ears, and red “blood” that looked remarkably like lipstick when viewed thirty years later. 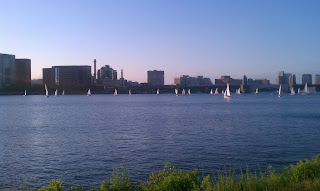 A quiet drive back to the city’s fire engines, helicopters, trains, and car horns, where wife and son fell asleep minutes after dinner, soothed by the familiar sounds of Boston.  I tucked each in, and made it just in time for a roof-top drinks party two blocks away as the sun set. 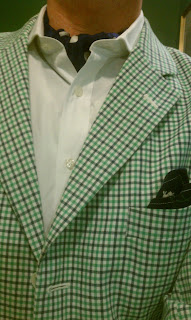 Posted by Yankee-Whisky-Papa at 12:36 PM