Over the weekend, I continued a pleasant exchange with a fellow blogger, and we agreed in our sensitization to rock throwing versus glass-house living.  It's nice to agree.

Using NASA-grade technology, and cutting-edge neuro-eavesdropping devices on loan from several Government agencies, I have been able to compile an exact transcription of the actual thoughts of men's style bloggers.  Below, I give you a rare glimpse into the the minds of these males... myself included.

[Alright... I found this LL Bean summer cotton shirt at their outlet for $4.  Let's blog.] 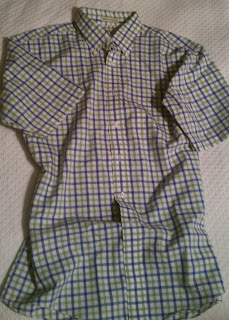 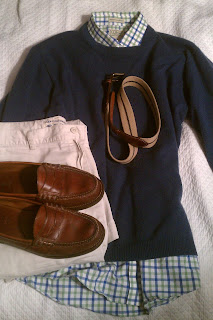 [But I need to gratuitously drive home my upbringing... Aha!  A squash racquet!  Perfect!] 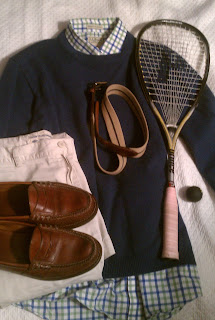 [Oh, wait... nobody dresses like that while they actually play squash, and I'd have to have the racquet in the bag to indicate that I'm going to the club in those clothes.  They'll call me out in the comments section.  I'll just show a squash outfit.] 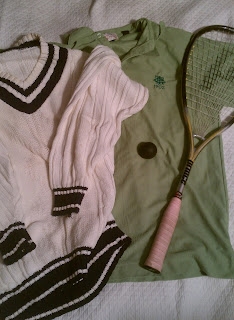 [Crap... it's boring too.  Wait, I seem to recall entire blogs dedicated to all things pink and green.  I'll throw in some of those colors.] 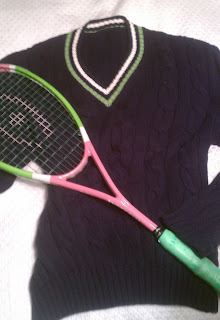 [Uh-oh, those are all girly blogs... better throw in a neutral racquet... still a dude.] 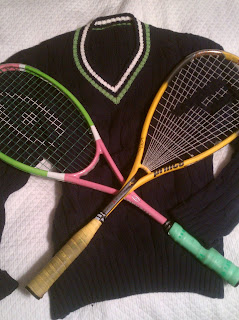 [Still not doing much, and I need to make people think that I live the life of a Ralph Lauren model.  Badminton!] 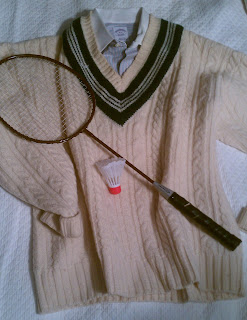 [Getting there... but still not fashion-shooty enough.  They'll peg me for a fake instantly.  How about croquet?  I could blog about my expansive lawn which is cared for by imported goats... no I live in the city and don't actually have any grass.  The one time I tried to play croquet in the Public Garden, I was nearly arrested by a Park Ranger*... this might not work...]
*Actually happened. 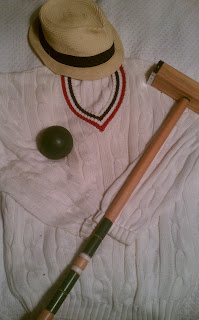 [...unless I add a tie, and it becomes more abstract and general-aesthetic/vibe/mood.  Yes, I'm closing in on it.  But what else could I add to this?  I don't own any sunglasses over $20*, and an English saddle would be overkill... c'mon, think... THINK!  A Martini glass?  No... too contrived.  A cigar?  No.  Running out of ideas.  Just throw in the tie.]
*Also actually true. 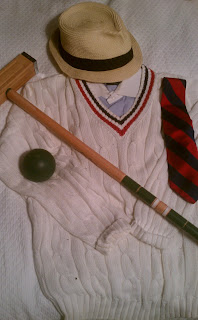 [Screw it.  An odd racquet just to bulk up the look a bit.  It doesn't make any sort of sense, but... will they care?  Will I get nasty comments?  It almost looks like a crest.  This is total horse-crap, but maybe they'll buy in.  Hang on here, I'm an adult and I'm still talking and writing about how people dress in college... isn't that a bit weird?] 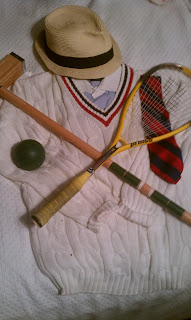 [Wait, SHOES!  I nearly forgot to show shoes.  What men's style blog is complete without fancy shoes?  This will let people know that I somehow simultaneously play croquet and squash dressed like a 1950's line judge.  It makes no sense, but I'll pull it off.  I need exclusivity and envy in every post.  I guess I could do that stupid thing where I put my hands in my pockets and look down, smiling bashfully like every model does in every catalog... God, I hate that.  Nevermind, I'll throw in some shoes and call it a post.  Maybe I'll say something like "The perfect outfit for leisurely days of sport."  Should I say "mansion" or "estate"?  Maybe Uncle will let me take a photo of myself in his luxury car, and I can pass it off as mine in the blog.] 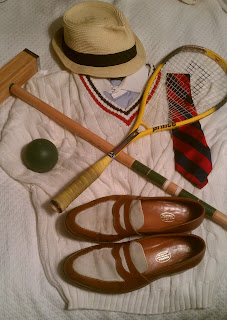 [This will have to do.  Even though the Ivy League is largely populated by people who dress like sloppy dorks and bros, I can make people think this crap is real.  I can always go back and sprinkle in some blog-only shibboleth... like OCBD and GTH.  Some of the abbreviations may also work.  Do I also blow the lid off of some of the popular summer colonies?  No, better let people think that everyone still dresses like they're in a catalog... I have a brand to uphold.  They'll never know that I'm actually in my underwear, eating burritos, and cruising other blogs.]


Posted by Yankee-Whisky-Papa at 6:41 PM