The Cup Spilleth Over, Trickleth Down The Street

Dear City of Boston,
You had almost four decades to plan for this parade of 1 million visitors.  Did you forget that mammals tend to urinate after drinking liquids?  Did you also forget that when those liquids are alcoholic, a wider array of perceived-as-acceptable urination targets open up?  It's true, I assure you.  The parade attendees assumed that since you provided no facilities, our nearby window boxes, front garden, and street-side planters would make adequate recipients for their createnine.  When those were exhausted, the brick and ivy sufficed for their purposes, worsening as the draw wore on.

...and speaking of plants and flowers, after the pleasant parade families left and only the goons remained, we posted a guard at the entry way and headed to the Seaport Convention Center for the World Association of Flower Arrangers Show, in what was EASILY the most odd juxtaposition of style and sensibility for our eyes that morning.  From lung-bursting screams of jerseyed/shirtless knuckle-busting blood-lust-drunkards to the tranquil dark air conditioning of an international flower show populated almost exclusively by dames of the well-dressed retiree crowd...


Bermuda shorts and blazers for the men were the uniform at the show, and I happily wore it. 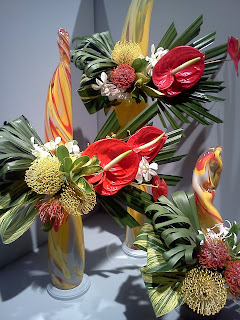 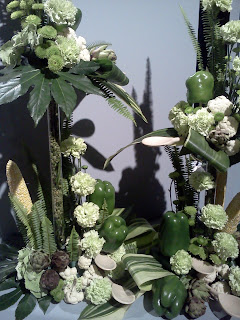 The flower show did serve beer.  Am I actually blogging about a flower show?  Oh, Boxing The Compass... how you've fallen from almost nothing to truly nothing.

On the way home, we stopped by James Hook for a few lobsters to bring home, and were surprised to see several twelve-pounders in the tubs.  Customers may roll their sleeves and fish one out, if you are friendly with the staff.


These tough geezers weren't for us... the best are usually the 1-2 pounders.  A stroll home past a gourmet grilled cheese truck, and just in time before a heavy rain deluge washed the Hill clean of confetti, piss, trash, streamers, and flopped-drunk bodies strewn about the sidewalks.

Posted by Yankee-Whisky-Papa at 1:44 PM