In the Los Angeles and Irvine area on light business, playing squash everyday.  One club didn't offer squash, but they let me and my racquet use the racketball courts for wall practice, to the odd stares of others.  There's something about racketball's stumpy racket and rambunctious, boisterous ball that seems inelegant.  I can't place it.  The squash clubs are busy, though.  No monochromatic clothing requirements here, but a good group of folks with competitive spirits.  I know, I'm being a snob.  A few posts ago, I showed a busted racquet, and I got a ton of emails about squash.  Unfortunately, the days of handsome squash sweaters are long gone due to heated buildings.  Sorry, lads.

Squash teams and clubs are statistically rare in the US, but around the world, you will find thousands.  Trinity College in Hartford had a 10 year winning streak, but there are families in India, Egypt, and Pakistan with generations of champions.  In Boston almost ten years ago, my (now) wife took me to the US Squash Open at Symphony Hall.  They set up a clear-walled squash court in the center of the hall, surrounded by risers and bleachers, and ultra-intense competition in the transparent court with 180 degree viewing (they did the same in Grand Central). 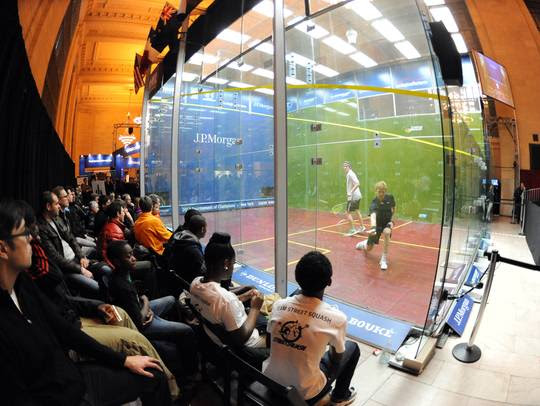 That year, Peter Nicol (ENG) was the one to watch, and he had the court style of a fencer against the Aussie opponents who were slightly less graceful but more athletic.  It was thrilling to watch, and some of the players could move faster with their entire bodies than most people could just following the ball with their eyes.  If you do attend a high-level match, be ready for great action, astounding athleticism, blindingly fast agility, and the disgusting smearing of sweaty hands on walls and doors.

As always, there is even a myth around squash concerning the clothing.  Like modern tennis, there are nearly no V-neck tennis sweaters, and the audience tends to be dressed in everyday garb as well.  Sweatbands, bandannas, Lycra, and synthetics are the norm.  While only a few clubs require white clothing (or 50% white, meaning the top or bottom garment in white) and collars on shirts, the overwhelming majority do not.  Sport and competition are the focus, and clothing is either purchased by the players or given to those on the circuit by sponsors.  As far as it being seen as a more exclusive sport, ask any professional squash player how many times they have had to sleep on the floor of the court itself during tournaments in their earlier days.  Or on couches, or in locker rooms, or on buses, or in cars.   The meritocracy of squash mostly levels it all out, and it tends to reward the singularly-minded, the relentlessly competitive, and the helplessly smitten.  Playing squash is good for friendships, good for spouses, good for parents and their children, and good for the lungs.  In a dispute, it also beats flipping a coin.

Posted by Yankee-Whisky-Papa at 6:46 PM